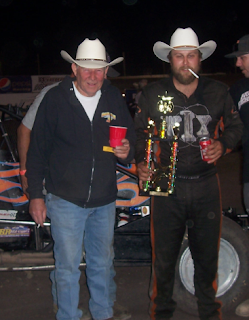 The Wingless Sprint Car competitors had an opportunity to qualify on the Jim Rodgers prepared 3/10 mile clay oval, and Ensign clocked in with the quickest lap of 12.950, beating the 13.190 of Arriaga. Ensign picked up the $100 bonus money for setting the fast time, and both drivers were able to avoid running the 10 lap heat races and went straight to the eight lap Scramble. Northwest Focus Midget star Jonathan Jorgensen won the first heat race ahead of Tim Alberding. Lindsay Barney impressed with her win in the second heat race ahead of Hudson. Arriaga drew a front row start for the eight lap Scramble and scored an impressive victory ahead of Barney.

Arriaga charged into the lead at the start of the Main Event with Ensign immediately settling into second. The lead duo ran close at the front before an inside pass in Turn 4 of the sixth lap gained Ensign the lead. Barney was running third ahead of Jorgensen and Hudson in a close battle for that position. Ensign had a straightaway advantage by lap 18 with Arriaga holding second by a comfortable margin as well. Jorgenson made a low pass in Turn 2 of the 20th lap to take third from Barney, but Hudson made an outside pass on the front stretch a lap later to get around Jorgenson as the drivers negotiated traffic. Working lap 23, Arriaga came out of Turn 4 too hard and hit the front wall and rolled. Fortunately, he was not injured. During the red flag, the Hudson team managed to deal with an oil leak that could have ended their race. Ensign led Hudson and Barney on the restart, and they ran in that order to the checkered flag as Barney pocketed $1,000 for her third place finish. Jorgensen settled for fourth, followed by Tim Alberding, Lance Hallmark, Mark Herz, Guy Weedman, Arriaga and Kevin Pendergrass. 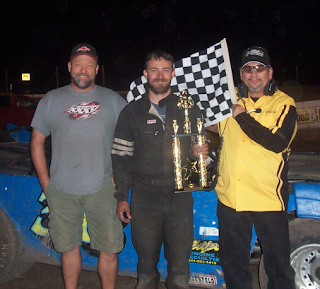 White City, Oregon...August 25...Taking the lead from John Dees, rookie Miles Deubert went on to win the 20 lap Late Model Main Event Saturday night at Southern Oregon Speedway. This was the second win of the season for Deubert, who won the season opener. Dees settled for his fourth second place finish of the season.

Point leader Nathan Augustine won both the four lap Trophy Dash and the six lap heat race, both ahead of Bob Dees. With a pole position start, Augustine charged into the lead ahead of John Dees. However, Dees raced by Augustine for the lead on lap three with Deubert quickly settling into second. Augustine discovered he had a flat tire and headed for the pits on lap eight as the battle heated up at the front of the pack. An inside move on the front stretch of the ninth lap gained Deubert the lead. Bob Dees had a good hold on third. Deubert ran strong the rest of the way for a well earned victory. John Dees settled for second, followed by Bob Dees, Dave Foote, Mike Linder, Dave Everson and Augustine. 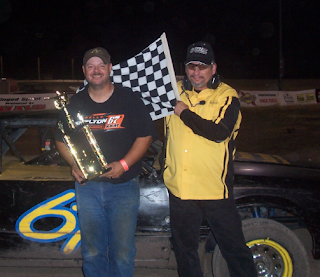 White City, Oregon...August 25...Leading all the way from his front row start, David Steele won the 20 lap Bobbio's Pizza Mini Stock Main Event Saturday night at Southern Oregon Speedway. The win was his eighth of the season, and he can lock up his first track championship by just starting the next Main Event. Hunter Magnan rebounded from some recent bad luck with a much-needed second place finish.

Steve Goetz started his night off on a high note with a four lap Trophy Dash win. Steele and Goetz then locked up front row Main Event starting positions with their respective six lap heat race wins. Steele charged into the lead at the drop of the green flag ahead of Goetz and Magnan. Magnan traded third with 2014 champion Gary Anderson a couple of times before getting the spot with a Turn 4 pass on lap four. An inside pass in Turn 4 of the seventh lap put Magnan into second. Rookie Ashtin Hedges was enjoying a good battle with Yreka point leader Marilyn Yawnick for the fifth position. Steele caught slower traffic on lap 13 and soon caught the battle for fifth. Hedges took an infield excursion off of Turn 2 to lose fifth, but he regained the position from Yawnick on lap 17. Hedges managed to stay on the lead lap as Steele won ahead of Magnan, Goetz, Anderson, Hedges, Yawnick, Garrett Fredrickson, Mike Whitaker, Mike McLeod and Kristopher Mix. 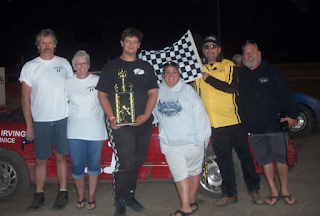 White City, Oregon...August 25...Taking the lead from championship contender Tim Hedges in the early stages of the race, Dylan Irving won his first career JOAT Labs Hornets Main Event Saturday night at Southern Oregon Speedway. Hedges was working on a potential clean sweep, but when he got on two wheels in Turn 4 and nearly rolled, he fell back two positions as Brandon Wonsyld picked up the second place finish.

Hedges won both his six lap heat and the four lap Trophy Dash, while Irving grabbed the win in the other heat race. Hedges and Irving had front row starts, and Hedges charged into the early lead ahead of Irving. An outside pass on the front stretch of the fourth lap gained Wonsyld third from point leader Bree Tritchler. Moments later, a caution flag flew for Chris Boynton. Hedges continued to lead Irving and Wonsyld on the restart. Working the ninth lap, Hedges got on two wheels in Turns 3 and 4 and lost momentum. Irving passed Hedges at the line, and Wonsyld gained second a lap later. A final caution flag waved for Boynton on lap 16. Irving continued to lead Wonsyld and Hedges on the restart, and they ran in that order to the checkered flag. Dylan Sauer was a season-best fourth, followed by Tritchler, Boynton, John Ferreira, Jenia Silva and Jenna Hedges.

The JOAT Labs Hornets will return on September 8th. Also on the card that night will be the Kendall Oil Winged Sprint Cars, Late Models, Bobbio's Pizza Mini Stocks and Valley Store All Late Model Lites. For further information, go to www.southernoregonspeedway.com.