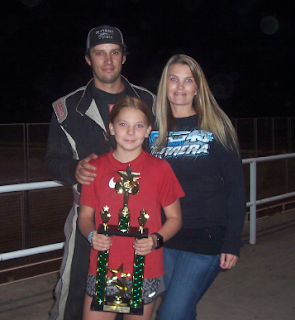 White City, Oregon...August 11...Garen Linder made a rare appearance at Southern Oregon Speedway and won the $2,000 prize in the 25 lap Iron Head Nationals Saturday night at Southern Oregon Speedway. Jeffrey Hudson took the lead from Tanner Holmes on the sixth lap and held it until Linder made a low pass in Turn 3 of the 16th lap to gain command. Linder led the rest of the race with Holmes settling for second ahead of Hudson, Jake Wheeler and Kyler Barraza. 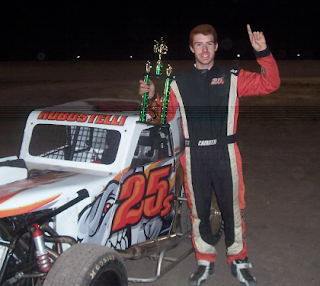 
Camden Robustelli won the 20 lap SODCA Dwarf Car Main Event. It was his first win here and third of the season with the traveling association. Robustelli gained the lead from Chad Cardoza on the 13th lap and faced a serious threat from Anthony Pope on lap 18. The two cars made contact in Turn 2. Pope lifted and took a ride through the infield. Robustelli kept leading the final two laps to win. Cardoza finished second ahead of Mac Marmon, Pope and Brandon Ross. 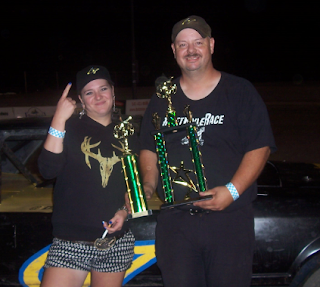 Point leader David Steele won his sixth 20 lap Mini Stock Main Event of the season. The race was never in doubt as Steele set a rapid pace and won by three-quarters of a lap. Hunter Magnan made a last turn pass on Kristopher Mix. The two cars made contact crossing the finish line with Magnan finishing second ahead of Mix, heat winner Ashtin Hedges and Steve Goetz. 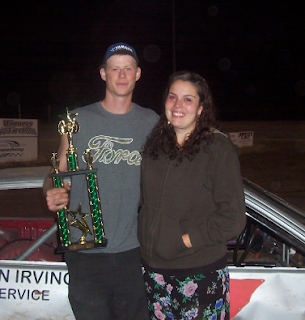 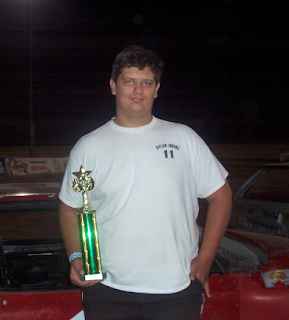 Next week is Hall Of Fame Night. In addition to seeing some Southern Oregon racing greats inducted into the Hall Of Fame, there will be six divisions competing. IMCA Modifieds will be back along with IMCA Sport Modifieds, Late Models, Bobbio's Pizza Mini Stocks, JOAT Labs Hornets and OTRO Hardtops. For further information, go to www.southernoregonspeedway.com.

White City, Oregon...August 10...Jacob James won his first ever 15 lap Box Stock Main Event Friday night at Little Southern Oregon Speedway. After winning one of his heat races, James charged into the Main Event lead from the start. Point leader Keaton Augustine and Ryan Hirschbock made this a close three-car battle throughout the non stop race. Hirschbock searched for a way around Augustine as Augustine did the same with James. However, James ran smooth and consistent laps and was rewarded with the victory ahead of Augustine, Hirchbock, Brandon Steinhoff and Natalie Richard.

After abandoning the point lead to run Box Stocks a race earlier, reigning Beginners Box Stock champion Malachi Johnson returned and won his fourth 12 lap Beginners Main Event. With heat race wins, Johnson and Mike Wheeler Jr. shared the front row for the Main Event. The race was close until Johnson made a good move around a slower car on lap ten and added a little distance between himself and Wheeler in his winning effort. Carson Henson was a strong third, and Jayme DeBenedetti beat incoming point leader Uriah Sanders back to the line for fourth.

2016 champion Johnny Burke returned for the first time since the season opener and won the 20 lap 500 Open Main Event. Burke won both of the heat races and sprinted into the Main Event lead from the start. Brenden Bartlett settled into second in his first start, while Merissa Henson and Reece Slyer battled for third. As the race wore on, Burke pulled away and scored the impressive victory. Bartlett held off Henson for the second place finish as Slyter settled for fourth.

Brenden Bartlett subbed for Brionna Fuller once again and won the 15 lap 250 Kart Main Event. The heat races were intense battles, and wins were recorded by Bartlett and incoming point leader Trevor Grimes. Grimes scratched from the Main Event, and Vinny DeBenedetti set the early pace ahead of Bartlett. DeBenedetti was doing a great job of leading the Main Event until spinning with a mechanical issue for a lap six caution flag. Bartlett grabbed the lead and led the rest of the way to win ahead of Taylor Fuller and DeBenedetti. Cadyn Smith was also a feature scratch.

Steve Rambo won his second straight 15 lap UAS Speedway Kart Main Event. Driving with a broken arm, Brionna Fuller won the first heat race, but Rambo held her off to win the other heat. Brionna Fuller led the opening lap of the Main Event before a mechanical issue ended her race. Rambo took over and led Larry Fuller and Ron Bolles. However, both Fuller and Bolles were out of the race by lap eight as Rambo won ahead of Ed Grubb, Lori Fuller, Bolles and Larry Fuller.

Albert Gill Jr. made his debut in the Novice Beginners Box Stocks and swept both heats and the ten lap feature. Gill has graduated to the Beginners class with his impressive effort. Gill led the Main Event from the start and won ahead of Issac Grimes, Bhaltair Edwards and Uriah Boardman. Boardman took a wild ride off of Turn 4 and into an infield pole to end his race. Fortunately, he wasn't hurt.

Outlaw Karts return for their seventh event this Friday night. For further information, go to www.southernoregonspeedway.com.
Posted by The Editor at 3:08 PM