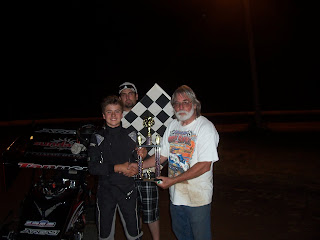 
You may recall the movie Field of Dreams. You know the saying. If you build it, they will come. Well, that doesn't necessarily just have to do to baseball. There are many young boys and girls all across the country who are racers and want to go play at the race track. As the sport of Outlaw Kart racing has grown over the past 25 years, more and more Kart Racing "Field of Dreams" have been built.

Just a couple of years after Southern Oregon Speedway was born, The Outlaw Kart track was built next to it. Since that time, it has become the Field of Dreams for many young racers. Some of the biggest names that fans have seen on the big track, such as Seth Nunes, Chad Noland, C.J. Putnam and Camden Robustelli, all raced on the Kart Track. Currently, Robustelli is a star in both Dwarf Cars and Sprint Cars, Nunes is the reigning Cottage Grove Sprint Car champion, Putnam has won a Dwarf Car championship and is now in an IMCA Modified and Noland was the last Southern Oregon Speedway Sprint Car champion in 2010.

Some of the kids that are out there today have hopes of racing on the bigger track and maybe even going big time one day. Other kids just enjoy racing Karts and having the opportunity to bond with their families and racing friends. Whatever the case, Kart Racing is a form of sport unlike any other. The closeness of the track to the bleachers and the pit setup allows fans to be up close to the action and lets them watch the racers and their crews work on the Karts in the pits.  It is a unique experience unlike racing on the bigger tracks.  Plus, you can catch a glimpse of the next generation of racers coming through the ranks.

The kids are learning the responsibility of working on a race car to get it ready for race day. Some of these kids are even going out there and finding their own sponsorships to keep their cars going. Plus, they learn about sportsmanship. Everything doesn't always go your way, and when it doesn't, you learn how to keep your cool. When you do have things go your way, you learn how to be a gracious winner and respect your fellow competitors.

Two of the biggest stars of the Karts today are Tanner Holmes and Trevor Grimes. Tanner is the reigning 250 Outlaw Kart champion and is going for the repeat as well as "Rookie of the Year" and possible championship honors in the 500 Karts. Last time, Tanner put on a driving clinic as he won both the 250 and 500 Kart Main Events. It wouldn't be too much of a stretch to see him behind the wheel of a Sprint Car some day soon. 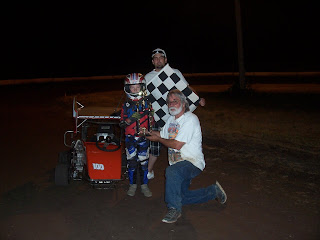 Young Trevor Grimes is already showing his ability pretty well. He is the reigning Box Stock champion and began the new season with a Main Event victory. One of the things about the Box Stock division is that the kids are learning how to handle their race cars out on the track. As they demonstrate their ability to handle their Karts and run side by side with other Karts, many of them will move up to the 250 Karts and beyond. Grimes is showing that ability, and a 250 Kart would not be a surprise for him in the future.

To hold onto the 500 Outlaw Kart point lead, Holmes knows that he's going to have to work pretty hard. At the opener, there were two hard chargers by the name of Chase Hill and Johnny Burke. Hill won his heat race before Holmes got his heat race win. Hill was involved in a tangle in the second heat and had to work on the car to get it ready for the Main Event. Everything looked to be going well as Hill dueled with Burke for the lead, but when the two got together in Turn 1 early in the race, that changed the complexion of things. Hill did take a checkered flag in second while Burke was done.

The 500 Karts are the pinnacle of the Outlaw Kart track as the fastest Karts out there. The 250 Karts are the next stepping stone and one of the biggest classes at the track. The drivers who are in the 250 Karts have already demonstrated their ability to handle it pretty well on the fast 1/8 mile dirt oval. In fact, one of the newest drivers in the class this year has graduated from Box Stocks. That would be Tanner Holmes's sister Carly Holmes, the 2014 Box Stock champion.

There was some good racing going on in the 250's last time out. Brendan Bartlett was unable to keep up with the fast pace of T. Holmes, but he still brought it home to a strong second place finish. It's not too much of a stetch to say that the driver of the #27b Kart will get himself a win very soon. The battle for third in the 250 Kart Main Event last time was one of the best battles the track had all night. It was a constant change of positions between heat race winner Enrique Jaime, Brody Sim and Bodee Weiser. The three Karts finished nose to tail at the end with Sim holding on to the third spot ahead of Weiser and Jaime.

In the Box Stocks, 2014 champion C. Holmes is still hanging tough and will be a factor as long as she continues to run this class. However, the reigning champion is T. Grimes. Grimes collected two heat race wins along with his Main Event victory. Holmes did win a heat race herself, but it didn't look like the handling of her Kart was quite up to her standards in the feature. She still did a good job of driving to a fourth place finish. Another young lady who was doing a good job in her Kart was the pink #10 of Isabella Jaime, who won a heat race and finished sixth in the Main Event.

In fact, the Box Stocks have many girls within the ranks who are just as fast as the boys. Bryson Snow can attest to that. Although he ran strong and ended up finishing a respectable second place in the Main Event, the girls were chasing him down. Emma Rodgers managed to get around C. Holmes during the race to grab the final podium position in third, but she just didn't have enough time to try to reel in Snow. Also grabbing a Top 5 finish in fifth was Nathalie Richard. Don't count these girls out. One of them may win this week.

Of course, in Kart Racing, you have to start some place. That brings us to the Beginners Box Stock division. The one driver with the experience factor going into the season is Jacob James. Jacob ran The Beginner's Class last year and was third in the points. He was competing against two drivers who were making their first starts, Kylie Grimes and Adrian Richard. Both have siblings who are now in the regular Box Stock division. There was another driver set to make his first start in the Beginner Box division, but he was a little nervous about his debut. That would be Will Wigly, who got to make a hot lap during intermission. We hope to see Will out there this week.

There is no substitution for the experience.  James clearly has that experience and won both heat races and the Main Event last time. However, Gimes, Richard and Wigley need to get some seat time. As they get comfortable with their Karts and how to drive them, they will get faster. The Beginner Box Stock division is an important class, because the speed can be intimidating to the youngsters as they get started. Putting them in the regular Box Stock division with drivers who have raced for a few years may be intimidating enough to keep them from racing. Putting them in the field with drivers who have almost no experience gives them the confidence to get better.

It's not uncommon to see a driver climb completely up the ladder, one division at a time from Beginner Box all the way to 500 Outlaw Karts. Another division that is on the roster is the 125 Kart class. However, at the moment there aren't many Karts in that group. Wyatt Pinchney is listed as the 2015 champion in this division, and Wyatt has moved up to the 250 Kart class. Reese Slyter jumped into the division this year, only to find out that he's by himself. While they try to get more Karts for this group, Reese is running with the 250 Kart class.

Some people may not consider Outlaw Kart racing something worth watching, but if you believe that, you just don't know. For the $10 it cost to come out there and be right in the middle of the action, it's definitely worth the investment. You can watch the next generation of racers at Southern Oregon Speedway's little Field of Dreams. The racing will be fast and exciting. This Friday's race is scheduled to start at 7 p.m. while the gates open at 5 p.m.  In July, there are two Friday night Kart races scheduled for July 8th and July 9oth.  For further information, check out www.southernoregonspeedway.com.
Posted by The Editor at 8:12 AM