Racers Come Out To Celebrate At Southern Oregon Speedway Banquet

Racers Come Out To Celebrate
At Southern Oregon Speedway Banquet 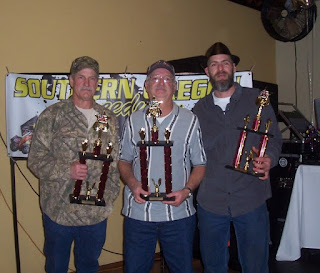 The racers and their families gathered for the 2016 Southern Oregon Speedway awards banquet Saturday night at Los Arcos Restaurant in Medford.  Champions were crowned in the track's seven regular divisions as the three other traveling groups have already held separate gatherings.

Track announcer Bryce Burtner handled the host duties superbly.  The ceremony started with a brief state of the race track address by promoter Mike McCann.  McCann thanked all of the racers and track officials for making the 2016 season a success.  He mentioned there were no major rule changes, but some rules would be clarified.  He also indicated that all divisions would be back and a 2017 schedule would be forthcoming in the next couple weeks. 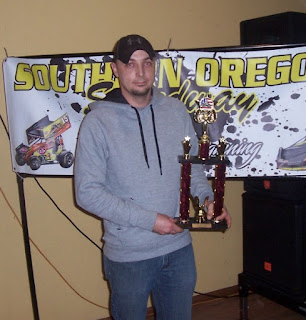 
It was also again pointed out that IMCA sanctioning would return for Modifieds and Sport  Modifieds.  Modified champion Mark Wauge was not on hand due to attending his daughter's high school volleyball tournament in Eugene.  Runner up James Welshonse was there and left with a trophy and a "Rookie Of The Year" award.  Welshonse nearly won the championship in a thrilling season finale victory, but Wauge held on in part due to his wins in the first two races. 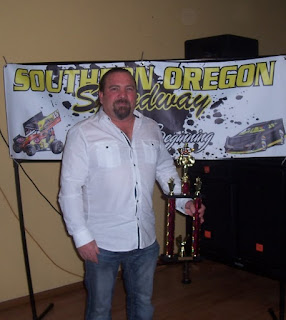 Mike Medel won the championship in the IMCA Sport Modifieds and is looking forward to a title defense effort in his new car.  Two time champion Jorddon Braaten settled for third at the track and first in the state, but he is also planning to return to the class.  David Marble was on hand to receive his second place trophy and "Rookie Of The Year" award.  He is gearing up for his second season in the class and will also be getting married in May.

The IMCA Sport Modified drivers have become a close knit group, and the Medford racers will again be a part of the Pacific Sport Modified Series.  The series was won by Braaten last year.  At the banquet, eight of the drivers shared a group photo.  "It's a growing class with a lot of good drivers " said new champion Medel.  "It's becoming more competitive.  I'm looking forward to racing these guys next season." 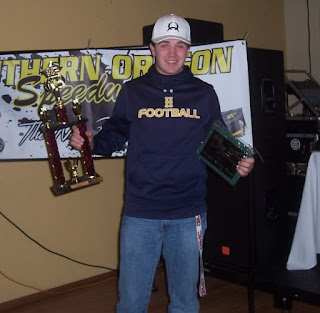 There will be some adjustments to the Pennzoil Sprint Cars in an effort to boost car count, and several drivers have indicated they will support the class as it tries to keep the cost down.  Point runner up Jeffrey Hudson was on hand for his second place trophy and rookie award.  "We didn't have the horse power to keep up with the guys last year, " said Hudson, who won the Outlaw Pro Stock title at 14 years old two years ago.  "If they go to the Limited Sprint rules package, I'm gonna run for the championship."

Champion Jake Wheeler was away on business, but his father Vern Wheeler Jr. was there to accept trophies for he and his son.  Vern finished fifth in points and won twice.  Jake was a one time winner as was Hudson.  The move towards Limited Sprints has already attracted interest from such racers as David Hibbard, Bailey Hibbard, Tanner Holmes, Camden Robustelli and Merissa Henson.


Henson finished fifth in Mini Stock points and confirmed her Sprint Car plans when she received her trophy.  Another racing teen, Dillen Lausen, was seventh in points and the top Mini Stock rookie.  After four runner up seasons, Bob Burkett impressed with three feature wins and six dash wins on the way to his first championship.  Bob will be racing next season.  "I'm looking at racing two classes " said Burkett.  "We'll run the Mini Stock some, and it looks like we'll be running a Late Mode Light." 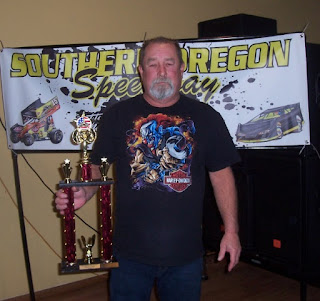 Late Model Lites is the new name of the Super 4 class.  Lee Doty left little doubt who the champion was with five feature wins and three dash victories.  He beat 2013 champion John Barger and Charlie Eaton for the championship.  All three drivers will be back, and car count is expected to grow. 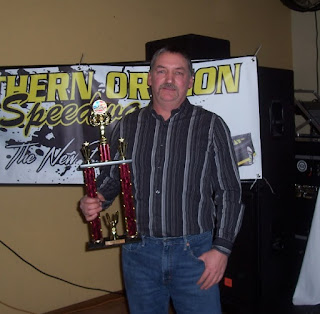 
Late Models were represented by champion Bob Dees, who won his battle with Mike Linder.  Bob's sons John and Garrett Dees were also there to accept their trophies.  All four drivers are returning, and Late Models are expected to grow this season.


Not to be left out are the Hornets.  Most of the drivers from last year will be back.  Runner up Derrel Nelson Jr., a two time winner last year, will be putting his son Gabe in a car.  Four time winner Joby Shields claimed third in points and is coming back. 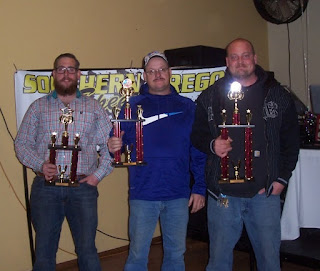 Hornets champion Tim Hedges won by consistency and had a damaged motor for much of the season.  He didn't find that out until after the season.  He's coming back in a big way.  "I want to see this class grow " said Hedges.  "We're planning to field three cars next season.  We're even looking for a fourth car.  It's a lot of fun, and it's the most affordable class out there."

OTRO Hardtops and SBDCA Dwarf Cars have been confirmed for next season.  Like the Outlaw Pro Stocks, they held their celebrations elsewhere.  Hardtops didn't keep points, but Brock Peters beat Camden Robustelli by just one point for the Dwarf Car championship.  The impressive Steve Borror held off Scott Flowers for the Pro Stock title.  McCann announced at the start of the banquet that Pro Stocks were coming back under the track's own umbrella as Rogue Valley Pro Stocks next season.

The banquet room was filled up for what was an informal gathering.  The Outlaw Karts were not included due to races being held elsewhere.  However, another banquet will happen for them next month.  Scheduling and other information will be available via the www.southernoregonspeedway.com web site.
Posted by The Editor at 3:09 PM